I went to Sillyventure 2010 in Gdansk, Poland. It was a demoparty only for Atari computers (8bit, ST/STE/TT/Falcon). This party was really cool, and many thanks to Grey/Mystic Bytes for having organized almost everything alone ! That was really impressive work.

At this party, I presented a 4 kB intro for the Atari ST. Its name is ``Coast to Coast'', as a homage to the Black Monolith Team screen named ``Coast'', released in 1991 in the well known Punish Your Machine megademo for the Atari ST. This intro features realtime-rendered Mandelbrot fractals where each pixel value is really computed (ie, we actually compute a Mandelbrot suite), unlike BMT who actually decompressed pre-rendered images, or Leonard of Oxygene who uses ugly approximations. 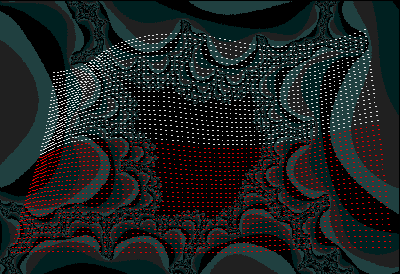 This intro also features a nice chip tune by Dma-Sc, and a dot flag effect in fullscreen.

I hope you enjoy it as much as I enjoyed making it !

Thank you for the flowers!

In fact though, Coast does calculate a Mandelbrot or Julia set and does not decompress precalculated pictures.
It does so on the basis of overhead reduction using unrolled loops and trapv comparison on the one hand, and following the theorem of no unconnected islands in the set, doing recursive rectangular intersection checking (using prime steps on the boundary of the rectangular area).